FOLLOWING WAS WRITTEN BY IRMA PLOTT

Irma Plot, great-granddaughter of Stephen James Matthews, Sr., was born September 26, 1906 and departed our family on July 15, 2000.  The story below is one of Stephen James Matthews, Jr., M.D.  This story was written by her own hand and is not dated.
Stephen James Matthews, Jr., M.D. was born November 4, 1842 in Lawrenceburg, Tennessee, was the second son and third child of Judge Stephen James Matthews, Sr. and Catherine Price.  When he was about five years old, his parents took the children from Lawrenceburg to the community of Lexington, in Lauderdale County, in Northwest Alabama.
At the age of fifteen, Stephen James, Jr. went to Nashville, Tennessee and entered the Nashville Medical College.  This school was renamed after the war between the states to Vanderbilt College when the Vanderbilt family donated a huge amount of money to the school.  After four years of study he came home to Lexington with his medical degree.  This was in May of 1861.
The war had just started a month before so Stephen James went to Florence, Alabama and volunteered for service on June 7, 1961 and was assigned as 1st Sergeant Company G, 9th Alabama Infantry Regiment on June 7, 1862.  He was severely wounded at the Battle of Gettysburg, July 2, 1863 when a mini ball hit his ankle.  His left leg was amputated just above the ankle.  He was fitted with a peg leg which didn’t seem to interfere with his medical practice that covered four counties; Limestone and Lauderdale in Northwest Alabama and Giles and Lawrence Counties in South central Tennessee.

Dr. Matthews was listed as being present and serving in the following battles for the Confederate States of America:

After being wounded and with the loss of his leg between the ankle and knee he was marked absent from the following battles:

The above record came from the Confederate Records of the University of Richmond, Virginia.  Dr. Matthews was married twice, first to Rebeca Jane Arthur, daughter of Henry Draden and Jensey Riggs.  And here is where her record stops.
Some family records show that Stephen James, Jr, while married to Rebeca Jane produced one son, Stephen James, III.  He was also married to Letha Florence Stafford and from that union came 11 children.  Irma’s grandfather, William Marion Matthews and  Dr. Stephen James Matthews were brothers.
The links here represent the children who lived and were named.  The two infants might have been named, but we are not sure.  If you have any information about the infants we would like to hear from you.

This article appeared in an old newspaper without a name, dated January 17, 1902 – and signed “A Friend”
“Dr. S. J. Matthews, an old Confederate soldier, who lost his leg at Gettysburg, PA, and a member of the O’Neal Camp U.C.V, and served in the late Fen. O’Neal’s company, I, 9th Alabama regiment, lost his saddle horse, all that he had.  If anyone is interested enough to give him a small donation it will be received gratefully and it will help him along.  He is not able to replace his horse and cannot get
along without one.  Address him at Rogersville, AL.

Application for assistance after loosing his leg in the Civil War 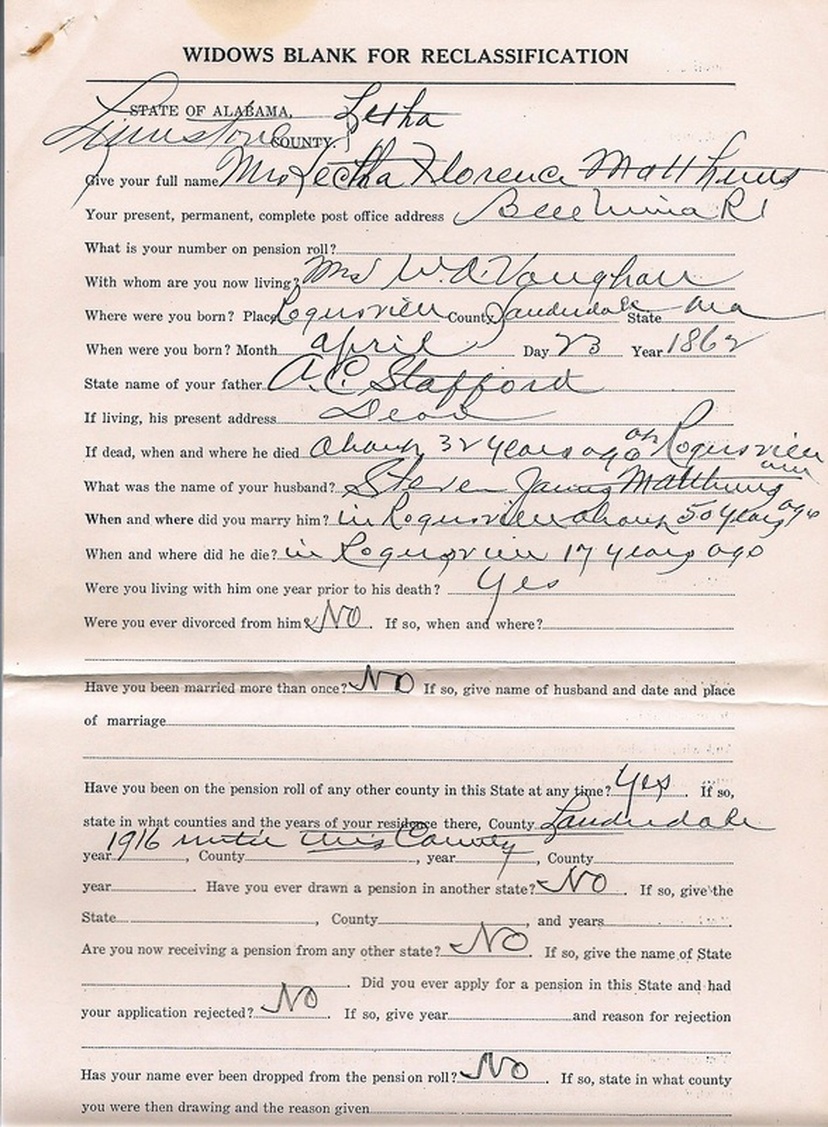 Unable to appear in court due to disability - missing leg